A short note on Cadmium: Source and Toxic Effect

Occurrence: The natural sources of cadmium are volcanic activity, spray from oceans and forest fires.

Anthropogenic source: Human activity increases the amount of cadmium to the atmosphere as compared to natural sources. Coal mining, coal combustion, non-ferrous metal mining, refineries, burning of refuse iron and steel industries and phosphate fertilizers are most important options for cadmium. Tobacco that contains cadmium is finely distributed in the air whenever emitted with cigarette smoke. Cadmium is chemically nearly the same as zinc. Moreover, it takes place with zinc materials.
Admittance of cadmium into plants, Animals and Humans: Plants needing zinc grab cadmium together with zinc since cadmium occurs coupled with cadmium, as a result, enters the food chain. Research established the existence of Cadmium in potatoes, wheat, rice as well as other grains. Seafood also offers a higher amount of cadmium.
Humans have cadmium in their system from tobacco cigarette smoking and from tobacco chewing tobacco leaves absorb cadmium from irrigation water. People living nearby and doing work for mines and smelters processing zinc and electroplating face a heavy risk of cadmium side effects. Cadmium is soluble in water and reaches the humans working in zinc mines.
The toxic effect of cadmium: Cadmium is a cumulative poison. It is retained in the body for a long time and causes: 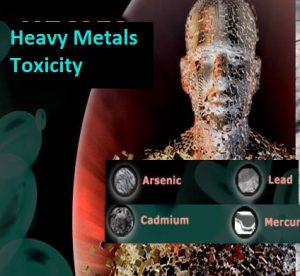 Itai-Itai Disease: A disease especially associated with Cd poisoning was recognized in Japan. People residing along the banks of Junstsu river in Northern Japan were eating the rice, which was contaminated with cadmium and they were consuming 100 to 1000 mg of Cd every day. A mining complex situated nearby the river was responsible for this pollution and by the end of 1965, about 110 deaths were documented. The victims accumulated about 500 to 600 mg of Cd in their body over a several years due to consuming the contaminated rice as their main food and finally fell due to the so-called “Itai-Itai” or “DuchDuch” disease. The Concentration of Cd in the rice grown in polluted areas was found to range from 0.6 to 1 mg per gram.

The disease was characterized by

Biological Effects, toxicology and toxicity: Cadmium is highly toxic due to the absence of homeostatic control for this metal in the human body. The general population is exposed to cadmium via ingestion or inhalation. The workers in mining and smelting industries may be occupationally exposed to higher levels of Cd in the body by steady accumulation over a long period. About 1 to 2% of ingested and about 11% of inhaled Cadmium is retained in the body and in mammals, the absorption increases when there is deficiency of Ca in the diet. About one-third of the absorbed cadmium is stored in the kidney, which is the target organ when excessive amounts of Cd2+ are ingested; it replaces Zn2+ at key enzymes sites and induces metabolic disorders.

***This article was posted by