A short note on Mercury: Biochemical effect, Toxicity, and Toxicology

Introduction: Mercury is a nonessential trace metal constituting 0.00003% by weight of earth crust. It is extracted mainly from its sulfide ore, cinnabar (Hg).
The biochemical effect, Toxicity, and Toxicology: Hg causes Minamata diseases. The methylmercury compounds present in the effluent wastes discharged into the Minamata Bay were gradually bio-concentrated by fish and shellfish in the bay which provided the sea-food for many families along its shores. The ailment became known as “Minamata diseases”.
Mercury has a fairly high vapour pressure and the vapour is quite toxic if inhaled. Vapour can diffuse through the lungs into the blood and then to the brain resulting in severe damage.
Organic mercurals such as methylmercury (CH3Hg+) are the most toxic substances because of their solubility in fat. The covalent Hg-C bond is quite stable and the alkyl mercury is retained in the cells for prolonged periods of time.
Different forms of mercury:
i) Mercury (II) oxide (HgO): Mercury (II) oxide also called mercuric oxide or simply mercury oxide has a formula of HgO. It has a red or orange colour. At room temperature and pressure, Mercury (II) oxide is solid.
ii) Mercury (I) chloride (Hg2Cl2): The chemical name of Hg2Cl2 is sub-chloride, Dimercury, dichloride, calogreen. Hg2Cl2 is an odorless white solid. The molecular weight of mercury chloride is 472.084 g/mol.
iii) Mercury sulfide (HgS): Mercury sulfide is a chemical compound composed of the chemical elements mercury and sulfur. It is virtually insoluble in water. Its molar mass 232.66 g/mol, Density 8.10 g/cm3, melting point 580°C. 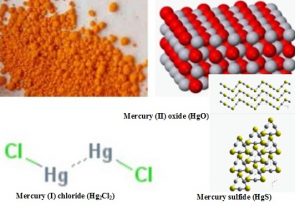 Treatment of mercury poisoning: Chronic mercury poisoning can be treated by removing the patient from the exposure area, supporting therapy and the use of appropriate metal chelating agents such as following: