MECHANISM OF ARSENIC CONTAMINATION IN GROUNDWATER 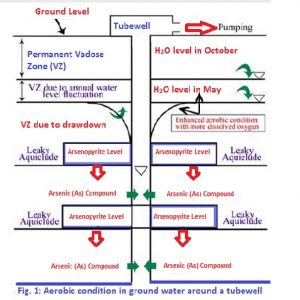 Presently, there are two well-known theories about the mechanism of arsenic contamination in groundwater. These are oxidation and oxy-hydroxide reduction theory. The oxidation theory is so far the accepted theory.
Pyrite Oxidation Hypothesis
Arsenic is believed to be found in particular sulphide minerals ( pyrites ) which are deposited within the aquifer sediments . The reducing of groundwater table due to over exploitation of groundwater for irrigation has initiated the discharge of arsenic. The large-scale withdrawal of groundwater has produced swift diffusion of oxygen within the pore spaces of sediment along with an increase in dissolved oxygen in the top part of groundwater. The newly released oxygen oxidizes the arseno-pyrite and also makes hydrate iron arsenate compound termed as pitticite in presence of water, which is very soft and water soluble compound. The mild pressures of tube-well water break up the pitticite layer into fine particles which make it easily soluble in water. After which it seeps just like drops of tea from the teabag and percolates from the subsoil into the water table. Therefore, whenever the tube-well is in operating, it excreted with the extracted water. This mechanism is shown in fig . 1 (Featured Image) . Owing to the dropping of water table below deposits, arseno-pyrite oxidized in the vadose zone gives out arsenic as arsenic adsorbed on iron hydroxide. While the subsequence recharge span, iron hydroxide delivers arsenic into groundwater. Based on this hypothesis, the source of arsenic abundant groundwater is man-made, which is basically the latest trend.

Arsenic is thought to be present in alluvial sediments with higher concentrations in sand grains like a coating of iron hydroxide. The sediments were settled in valleys eroded in the delta when the stream base level was decreased owing to the drop in sea level at the time of the last glacial advance. The organic matter deposited with the sediments decreases the arsenic containing iron hydroxide and delivers arsenic into groundwater. Based on this hypothesis, the source of arsenic enriched groundwater is due to a natural method, and it may seem that the arsenic in groundwater has been present for thousands of years without being flushed from the delta.

The oxidation of arseno-pyrite could be the main mechanism for the ground water arsenic contamination in Bangladesh but there is not enough hydrological and geological data to validate the process completely. The validity of oxy-hydroxide reduction theory is also questionable due to the lace of comprehensive sampling and systematic analysis of iron oxy-hydroxides in the affected areas.