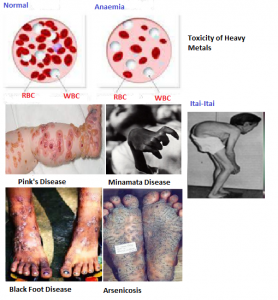 Lead poisoning is a form of metal poisoning due to lead in our body. The human brain is considered the most sensitive. Symptoms can include abdominal discomfort, constipation, headaches, irritability memory troubles, inability to have children and tingling in the hands and feet. It causes almost 10% of intellectual disability of other unknown cause and can result in behavioral problems some of the effects are permanent. In several cases, anemia, seizures, coma or death may occur.

When the blood lead level reaches about 0.8ppm, symptoms of Anemia will observe due to the deficiency of hemoglobin. Higher levels of Pb in the blood can cause kidney dispenser and brain damage.

The airborne lead of small particle size is readily absorbed through the lungs. On an average, only about 10% of inorganic lead that is ingested is absorbed and is distributed in the various tissues-liver, bones, kidneys, and brain chronic exposure to lead causes weight loss and loss of teeth.

Mercury poisoning is a sort of metal poisoning caused by mercury exposure. Signs or symptoms rely on the form, dosage, approach, and time period of exposure. They can contain usually affecting the neurologic, gastrointestinal ( Gl ) and renal organ system poisoning may originate from mercury vapor inhalation, mercury absorption, mercury injection and absorption of Hg via the pores and skin , except this muscle fatigue , lack of coordination , numbness in the hands and feet skin rashes , anxiety , problems hearing or trouble seeing are also included .High-level exposure to methylmercury is known as ‘Mina Mata disease’. Methylmercury exposure in children may result in acrodynia (Pink’s disease) in which the skin becomes pink and peels. Long-term complications may include kidney problems and decrease the intelligence.

Toxicity of Arsenic (As):

Arsenic poisoning is a disease that takes place because of elevated levels of arsenic in our body. It exposure occurs over a brief period of time symptoms consist of vomiting, abdominal discomfort, encephalopathy and watery diarrhea which contains blood.

Dr. Azad, Scientist, Hokkaido University, Japan, has made of following classification of disease caused by Arsenic in Bangladesh:

In Bangladesh, the majority of patients are still at initial and second stages according to the research findings disclosed by Dr. Azad.